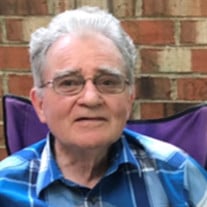 Russell Richard Bedford, age 80, of New Castle, DE, went home to be with the Lord Thursday, February 4, 2021. Russell was born July 12, 1940, in DuPont, PA to Ernest Russell Bedford and Viola (Powell) Bedford. After high school, on February 9, 1959, Rich enlisted in the United States Army and served honorably at Fort Dix, New Jersey, Fort Knox, Kentucky and as a ballistic meteorologist at Fort Carson, Colorado. Following his military service, Rich moved to Delaware, where he met his wife and raised a family. Rich began a career that lasted over 30 years working for ICI and later Astra Zeneca. He loved the weather, gardening, his family and his grandchildren. He enjoyed woodworking and could build just about anything, often from little more than an idea in his head. He was an active member in his church and often served as deacon, or when called upon to sing in the church choir. Rich was preceded in death by his parents; his loving wife, Judith Martine (Hall) Bedford whom he was married to for 45 years; his sister, Norita L. D’Andrea; and his brother, Edward J. Bedford. Left to mourn his passing are two sons, Brian (wife, Scotti) Bedford and Jeremy Bedford; two grandchildren, Maren June and Waylon Cecil Bedford; a sister, Thelma (husband, Richard) Trygar; and brother, Harold L. Bedford, and a host of family and friends. A private service and military burial, with honor guard, will be held Thursday, February 11, 2021, at noon, at the Delaware Veterans Memorial Cemetery in Bear, DE. In lieu of flowers, donations may be sent in Rich’s memory to Seasons Hospice, 220 Continental Dr., Suite 101, Newark, DE 19713. To send an online condolence, visit www.stranofeeley.com

The family of Russell "Rich" Bedford created this Life Tributes page to make it easy to share your memories.

Send flowers to the Bedford family.