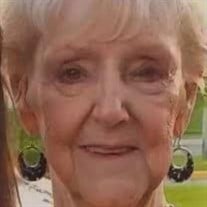 Sarah F. Foth passed away on Thursday morning, October 21st surrounded by family at the Delaware Hospice Center in Milford. During her lifetime, Sarah was a dedicated daughter, sister, wife, mother, grandmother, and great grandmother. She enjoyed spending time with her family, fishing, cooking, and watching television. She was preceded in death by her husband of 44 years, Paul Foth, her brother Alvin Helm, her mother Ruth Helm, her father Earl Helm, and her companion of 11 years Edward Fritzsche. She often told her children and grandchildren that these relatives visited them in the form of butterflies, which were her favorite symbol. Sarah is survived by her sister Pat Dower, children: Paul (Beverly) Foth, Tracy (Kurt) Wilhelm, and Beth (Anthony) Kotowski, grandchildren: Anthony, Sara-Beth, Meghan, Brynn, Wyatt, and Ruth, great grandchildren: Reilly, Brianne, Eva, Kennedy, and Jack, and granddogs: Gemma and Billy. The family would like to especially thank Sarah’s caregiver Sharon Robertson and the hospice staff who cared for her. A graveside will be held at the Delaware Veterans Memorial Cemetery, 2465 Chesapeake City Road in Bear on Friday, November 5th at 1pm. In lieu of flowers, the family asks that you make donations to the Delaware Hospice Center, 100 Patriots Way Milford, DE 19963.

The family of Sarah F. Foth created this Life Tributes page to make it easy to share your memories.

Send flowers to the Foth family.