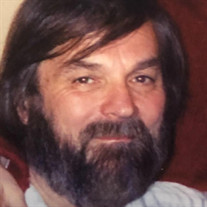 Stanley N Nock Jr, age 75, of New Castle, Delaware sailed away on January 8, 2021. Stan was born on December 17, 1945, in Crisfield, MD, the first of six boys born to Stanley Nock and Emily Crockett Nock. As the oldest brother, Stan took the role of protector and defender to heart. All his life, he would be both the rock and soul of the family. The family relocated to New Castle, Delaware in 1950 as the owners of Nock's Garage on Dupont Highway; however, Stan often visited Crisfield, the "crab capital" of the world, where he developed a lifelong love of the water, boats, and seafood. As a boy, he and his brothers would pack a lunch and spend the day on the Little Annemessex River. Growing up with Nock's Garage (later joined by the adjacent Motel DeVille) mere steps from the backdoor, combining family and business came natural - it was in his blood. Stan attended William Penn High School, where he met the love of his life, Rebecca Galich. He graduated in 1963, and they married in 1964. They immediately began their family with Bill in 1964, followed by Holly in 1968, and Heather in 1977. As the provider for his family, he worked at Chrysler before following his dream and founding Kilmarnock Industries. Eventually, his love of the water culminated in opening his own seafood restaurant, The Crab Shack. Waking at 3 a.m. to source the freshest seafood to sell was a joyful adventure for Stan and his kids because it was time spent together. One of his most shared memories of those years include Holly "manhandling" bags of clams as big as she was. Stan loved combining his love of being an entrepreneur and a family man. He was able to live that dream when Bill worked at The Crab Shack and then again when Stan partnered with Heather as owners of Cool Beans Gourmet Cafe. His businesses were always welcoming homes for any and all family members. Later in life, he started a new career as a long-distance truck driver where he could still be his own boss. Being with family was one of Stan's greatest joys in life, and as if his family wasn't naturally large enough with over 50 members, his love extended to "adopted" family members: his many friends, and later, the friends of his kids and grandkids, all of whom called him "Poppy," an endearment he loved and bore with honor. Poppy made everyone feel loved and special. People just gravitated towards him - there was just something about him that inspired trust and respect, even if you barely knew him. Calm, steady and slow to anger, Stan never said a bad word about anyone. His work ethic was unmatched by people half his age, yet he would generously drop everything to come to his loved one's need - he was thoughtful and reliable. So many people counted on his wisdom and strength... it's hard to imagine what we will do without him. Anyone who knew Stan can attest to his huge heart - he never wanted or needed thanks or recognition for the many kindnesses he graciously performed. Stan was a rare breed, a genuinely good man, whose shoes will be impossible to fill. To know him was to love him, and his presence will be missed by more people than he ever could have known, especially his beloved family as they try to find comfort and solace in the beautiful memories Stan helped them all create. A final note: Stan rarely got sick and hadn't been hospitalized since he was born. While he took all the necessary precautions to stay safe, he also felt like he had nothing to worry about; he thought he was immune. If anyone doesn't take this disease seriously by now, please take this as a warning: Wear a mask. Wash your hands. Stay home if possible. Stan is survived by his children: Bill Nock, Holly Nock, and Heather Nock; his grandchildren: Sarah Nock, Sammie (Nock )Blevins (Dan), KariAnne Delaria, Kaitlin Delaria, Eric Field, Alex Nock, and Kevin Hunt; his great grandchildren: William Smolka IV, Emily Smolka, Riley Smolka, Kayleigh Norwalt, Juliette Norwalt, Maddison Norwalt, Olivia Hannah, and soon-to-be-born William Hannah III; his brothers: Rick Nock, Jack Nock (Heidi), Dennis Nock (Nikki), Quinn Nock (Marty), and Terry Nock; and many cousins, nieces and nephews. Stan was preceded in death by his parents, Stanley Nock Sr and Emily Nock; his wife, Rebecca Nock; and his great-granddaughter, Savannah Norwalt. A visitation will be held Friday, January 22, 2021, from 2-3 PM at Strano & Feeley Family Funeral Home, 635 Churchmans Rd, Newark, DE 19702 followed by a memorial service in celebration of Stanley’s life at 3 PM. Zoom meeting information as follows, meeting ID: 857 5592 5067, password: Stan. For directions or to send an online condolence, visit www.stranofeeley.com. In lieu of flowers, the family requests a donation to the Ronald McDonald House in Stan's memory.

The family of Stanley N. Nock Jr. created this Life Tributes page to make it easy to share your memories.

Send flowers to the Nock family.