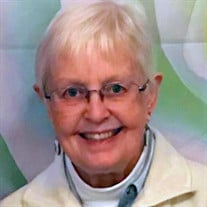 Susan Spencer Ford was a daughter, sister, wife, mother, grandmother, great-grandmother and friend. She passed away peacefully at home in Hockessin, DE on October 16th at age 79. She is survived by her husband David, their children, Christopher, Shawn, Marlee, Jana, Ashley, 12 grandchildren and her great granddaughter. She was born to Harvey and Maureen Spencer in Wellsville, New York on April 7th, 1942. Sue was a graduate of the University of Michigan and the University of California, Berkeley and worked as a physical therapist. Sue met and married David Ford, and they created a home and family with five children, Chris, Shawn, Marlee, Jana and Ashley. She worked as a physical therapist for the Delaware Curative Workshop at A.I. DuPont Children’s Hospital and also, at multiple nursing homes in the Wilmington area. After a few early moves, Sue and David settled in a home in Hockessin, Delaware, where they lived until she passed. Her three daughters were adopted from Korea through Welcome House adoption agency. Her love of children also led her to volunteer as an escort to accompany newly adopted children to the US from Korea. After working as a stay-at-home parent for several years, she went back to school at Delaware State University to earn a Master’s degree in Social Work, while still raising her children. Sue specialized as an adoption social worker with Welcome House, facilitating and making possible the adoption of hundreds of orphan babies and children from Korea, China, Russia, Romania, India, and the Philippines during her long career. After retiring from her social worker position, Sue also worked as a travel agent and later retired as a head teller with PNC bank. She was lucky to have only been robbed twice, but at least she did get the rest of the day off (ha ha). Sue was a devout Christian--she and David sacrificed in many ways for the sake of living and enacting their values. One significant way was investing in private Christian school for all of their children. She has been a member of the Pike Creek Bible Church community for over 50 years, more than a half century, and many of the people gathered here today to celebrate her life and mourn her passing are from her church community. Sue enjoyed playing the piano and singing; she spent several years serving in the church choir. She also enjoyed playing cards, crossword puzzles, and especially loved traveling. Sue had a passion for collecting figurines, with a special love for owls. She enjoyed feeding birds and watching the wildlife around their home. Sue was also a huge football fan, who cheered on the Eagles from her home. She truly loved and enjoyed her children, grandchildren, and great granddaughter—they are her most profound legacy. Her grandchildren include-Alexis, Mason, Hayden, Harrison, Clayton, Reese, Taylor, Chad, Sky, Maddison, Nina, Momo, and her great granddaughter Hazel, and one grandchild on the way, who will be born to Alexis in April 2022. Relatives and friends are invited to a visitation on October 21, 2021 from 10 to 11 AM at Pike Creek Bible Church, 199 Polly Drummond Hill Road in Newark, where a celebration of life will be held at 11 AM. In lieu of flowers, donations can be made to the Charis fund of Pike Creek Bible Church (select Charis from pulldown menu), or the Sunday Breakfast Mission.

Susan Spencer Ford was a daughter, sister, wife, mother, grandmother, great-grandmother and friend. She passed away peacefully at home in Hockessin, DE on October 16th at age 79. She is survived by her husband David, their children, Christopher,... View Obituary & Service Information

The family of Susan S. Ford created this Life Tributes page to make it easy to share your memories.

Send flowers to the Ford family.