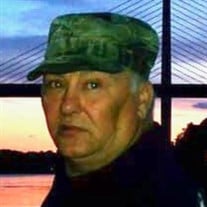 Terry L. Arnold “Cap”, age 69, of New Castle, DE passed away Thursday, January 27, 2022. Born on September 14, 1952, Terry lived life to the fullest “went through the alfalfa”. He enjoyed hunting, fishing, crabbing, scenic car rides in search of deer, and a nice cold beer. His love was felt by many; Family being everything to him. Terry devoted over 40 years to his job at Chemax until he eventually retired. A hardworking man is an understatement to describe him. Terry is loved deeply by all who knew him and will be truly missed. He is survived by his son, Terry Arnold Jr. (Kimmy); his daughters: Debra, Patricia, and Brenda Arnold; his grandchildren: Ashley Scott (Matt), Brandy Hickman (Will), Bryan, Jewel (Jacob), Bryanna, (Mike)and Aubrey Stranahan, Marissa Adelia Bost, Chas Pernot (Ashley), Terry Arnold lll (Savannah), Austin (Jamie), Laci, and Sabrina Arnold, his great-grandchildren: Brandon Keen, Nolan Hickman, Jacob, Logan, and Avery Pernot; and his siblings: Marvin, Robert (Henrietta), Carson(Donna), Lannie (Sue), James (Ruth) Arnold and Martha (Larry) Carpenter. He was also loved by many nieces, nephews, and friends. He was preceded in death by his wife: Mildred Adelia Arnold, with whom he shared 33 years of marriage and is now finally reunited with. He also is preceded by his parents, Lester and Mae Arnold; sister, Brenda; and brother, Doug (Surviving wife, Della). Over and Out Relatives and friends are invited to attend both visitations. First being held Tuesday, February 8, 2022, from 6-8 PM at Strano & Feeley Family Funeral Home, 635 Churchman’s Rd, Newark, DE 19702. A second visitation will be held Wednesday, February 9, 2022, from 10-11A M followed by a service in celebration of Terry's life at 11 AM at the funeral home. The burial location will be at Gracelawn Memorial Park. For directions or to send online condolences visit www.stranofeeley.com

The family of Terry "Cap" L. Arnold created this Life Tributes page to make it easy to share your memories.

Send flowers to the Arnold family.