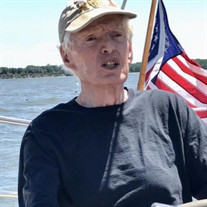 Thomas Robert McDowell, Jr., age 89, peacefully passed away on Sunday, August 16, 2020, at the Delaware Veterans Home in Milford, DE after a valiant, Marine fought battle with Parkinson's Disease. Tom was born in Pittsburgh, PA, on January 1, 1931, to the late Thomas Robert, Sr. and Viola (Thompson) McDowell. In his youth, Tom enjoyed scouting and earned his Eagle Scout Award prior to heading to Thiel College. Upon graduating in 1953, Tom married his college sweetheart, first wife Barbara (Bobbie) McDowell and immediately entered the Marine Corp as a First Lieutenant to serve in Korea. Tom and Bobbie spent most of their years together raising their six children in Wilmington, DE where Tom was ever present at his children's sporting events as the loudest cheerleader in the stands where he continued the tradition with his grandchildren. Tom was a natural born salesperson and spent most of his sales career with the J. H. Day Company. Prior to that, he was employed by GM Delco in Pittsburgh where he was able to show off a new company car he received each year. Summers were spent traveling the USA in a recreational vehicle experiencing Tom's “your feet don't touch the ground” tours. Home building and home renovations were another favorite pastime as he spent time working on his and his children's houses. With his love of the water, Tom built a home in Turkey Point, MD. Tom and Bobbie retired to Old New Castle where Bobbie predeceased him in 1997. Tom was very active in the life of Old New Castle. He met Nancy at A Day in Old New Castle and they married the following year on Separation Day in 2000. Tom and Nancy enjoyed their years together with their many friends volunteering for community and church projects. Tom was an ordained Deacon at New Castle Presbyterian Church and volunteered for Friendship House for many years. Nancy was a fierce advocate for Tom's healthcare, enrolling him in numerous research studies and trials. After his Parkinson's diagnosis, Tom was determined to help fund research to find a cure. In 2014, he and his daughter Beth raised $20,000 for the Michael J. Fox Foundation while journaling Beth's 3,700 mile adventure from Portland, OR to Portland, ME. The following spring, Tom put his persuasive fundraising skills back to work when they raised another $20,000 with the local “Bike to Brunch for a Cure” event. Never one to back down from a challenge, Tom trained for months so that he could participate on his specially adapted bicycle. Tom was invited to the foundation's annual gala where he had the honor of meeting Michael J. Fox. You could not walk past Tom without him striking up a friendly conversation. Tom loved life and always had a positive outlook. Nothing was so bad that a trip to the ice cream shop could not fix. None of his family will need an introduction at the Pearly Gates as he is telling everyone about his kids, grand kids, etc. Tom lived up to the saying “Old soldiers never die; they just fade away”. As a proud Scotsman, we are sure he heard bagpipes upon entering. The family would like to express our heartfelt gratitude for the staff at the Delaware Veterans Home. Tom received loving care and attention during his time there. In addition to Bobbie, Tom was predeceased by his daughter Meg in 2004. He is survived by his wife Nancy Coning of New Castle, DE; children Paul McDowell (Mary) of Alexandria, VA, Laurie Worsham (Richard) of Little Rock, AR, Beth Friedman (Ed) of Wilmington, DE, Amy Lieberman (Randall) of Landenberg, PA and Tod McDowell of Gaithersburg, MD; his grandchildren Megan Friedman, Maura McDowell, Max Friedman (Stephanie Debuski), Avery Lieberman Eaton (Daniel), Stone Lieberman and Shelby Worsham and his darling great-granddaughter, Violet Eaton. Also, surviving are his stepchildren Emily Sobolesky (John) of New Castle, DE, Geoff Maslovich of Margate, FL and Mark Maslovich of Philadelphia, PA; his step-grandchildren Jordan and Jake Sobolesky, Ashley Maslovich (Zach Bradley) and Jenna Maslovich and his step great-granddaughter Avery Bradley. A private Military Honors service will be held in the chapel at the Delaware Veterans Memorial Cemetery in Bear, DE. The Celebration of Life is scheduled for January 1, 2021. Please check back in late December under upcoming events for further details regarding the Celebration of Life. In lieu of flowers, contributions can be made in Tom's memory to the Michael J. Fox Foundation for Parkinson's Research, www.michaeljfox.org/donate or the Delaware Veterans Home, www.vethome.delaware.gov To send an online condolence visit www.stranofeeley.com Semper Fi.

The family of Thomas Robert McDowell Jr. created this Life Tributes page to make it easy to share your memories.

Send flowers to the McDowell family.