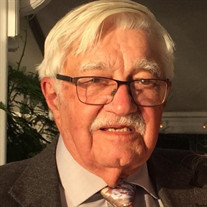 Wesley Glenn Morrison, age 90, of Newark, DE departed his earthly home to join his Lord and Savior on Saturday, March 12, 2022, at Brookdale Assisted Living in Dover, where he had resided since May 2021. Glenn was born on February 8, 1932, in Anderson, SC to Juby and Louise Morrison. He is preceded in death by his parents, his wife Jean, and his brother James (Buck) Morrison. He is survived by his children Cathy (Cliff) Maness of Asheboro, NC; Wesley (Tina) Morrison of Bear, DE; and Denise (Michael) Yearian of Townsend, DE; as well as 9 grandchildren Kasey (Shane) Rynkowski of Queen Creek, AZ; Kristen (Mike) Conley of Queen Creek, AZ; Justin Morrison of Port Penn, DE; Tyler (Dawn) Anderson of State College, PA; Christina (Ziggy) Maness of Asheboro, NC; Courtney (John) Beveridge of Bowie, MD; Jordan (Joe) Jakubowski of Newark, DE; Kaitlin Anderson of Oakland, CA; and Bethany (Samuel) Sheldon of Wilmington, DE; and 19 great-grandchildren. He is also survived by his siblings Linda M. White of Anderson, SC; Floride Manning of Laurens, SC; Nina Katherine (K) Henderson of Anderson, SC; and Dan (Butch) Morrison of Rock Hill, SC. Glenn graduated from Clemson University in 1953 with a bachelor’s degree in Electrical Engineering. Immediately following graduation, he began working for Tennessee Valley Authority in Chattanooga, TN. It was there that he met the love of his life, Ella Jean, whom he married in 1954 and remained so for 56 years, until her unexpected passing in 2010. In 1954, Glenn also enlisted in the army and served as a lieutenant for two years, stationed at Fort Gordon, GA, and Fort Monmouth, NJ. In 1956, he began working for the Dupont Company at Savannah River Plant in Augusta, GA. In 1961, he transferred to Newark, DE and began working in the Engineering Department at the Louviers Building. This led to a lifetime of technical consultations on power systems for Dupont plants around the globe. In addition to numerous professional accomplishments, Glenn led corporate-wide efforts to improve electrical safety performance, including producing four electrical safety videos, which were distributed worldwide. He retired from Dupont in 1993 as a Principal Consultant, after 38 years of service. He also acted as Vice President of Harvard Environmental, Inc. in Bear, DE. Throughout his adult life, Glenn had several passions and interests. Most important to him was his love for the Lord Jesus, whom he served nearly 70 years, most of that at Bethany Baptist Church in Newport, DE. His servant leadership took on many roles there, including deacon, youth director, chairman of the Sunday school department, and chairman of the benevolence team, to name a few. More important, were the relationships he forged with others, teaching, mentoring, and discipling them on their faith journey. Glenn was also an avid golfer, with a long-standing membership to Louviers Country Club in Newark, and later Chisel Creek Country Club in Landenberg, PA. God blessed Glenn with such good health that he played golf right up to the last few months of his life. A visitation will be held on Wednesday, March 30, 2022 from 10:30 to 12 PM at Love of Christ Church, 2157 Bear Corbitt Road in Bear, where a celebration of Glenn’s life will be held at 12 PM. Burial will follow at 2 PM at the Delaware Veterans Memorial Cemetery in Bear. For directions or to send an online condolence please visit www.stranofeeley.com

Wesley Glenn Morrison, age 90, of Newark, DE departed his earthly home to join his Lord and Savior on Saturday, March 12, 2022, at Brookdale Assisted Living in Dover, where he had resided since May 2021. Glenn was born on February 8, 1932, in... View Obituary & Service Information

The family of Wesley G. Morrison Sr. created this Life Tributes page to make it easy to share your memories.

Send flowers to the Morrison family.