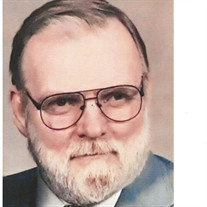 William (Bill) L. Milliken, age 86, of New Castle, DE passed away peacefully on August 2, 2021. His wife, Carol, and his son, Will, were by his side supporting his transition to the next world. Bill was born on September 29, 1934, in Wilmington, DE, to Howard Milliken and Florence (Kimmey) Milliken. Bill attended the Brown Vocational High School in Wilmington. Bill proudly served in the Navy from 1953 to 1957. He was assigned to the USS Mount Olympus and shore duty in Astoria, OR and Norfolk, VA. Bill was a member of the Plumber – Pipefitters Union, Local 74 in New Castle, DE, from 1952 until 1996 when he retired. Bill (Whitefeather) was an Elder of the Native American group the Buffalo Trace Society. He was highly respected and endeared for his gentle ways of teaching and guiding others with a great sense of humor and quick wit. He was a charter member of the Borderline Truckers Van & Truck club. A 32nd degree Mason and a member of Faith Lutheran Church in Bear, DE. Bill often remarked that he had lived a full and happy life filled with many adventures and hobbies. The greatest of those was just sharing life with his wife Carol. Some of his many loves were fishing, kayaking, walking, making and playing Native American flutes. Some of his best times were combining two of his loves by fishing from his kayak. Being a part of the Native American community brought great joy to his heart. Bill is survived by his wife, Carol of 35 years; his son, William Milliken Jr; step-son, Jeffrey Gallion (Sue); step-daughters, Tanya VanSant (Jules) and Michelle Barnhart (Tom); 10 grandchildren and 9 great-grandchildren; and many friends and family of the heart. He was preceded in death by his parents, Howard and Florence Milliken; daughters, Dawn Strauss and Lisa Finan; and daughter-in-law, Stacey Milliken. A viewing will be held on August 14, 2021, from 9:30 - 10:30 am at the Strano and Feeley Family Funeral Home, 635 Churchmans Road, Newark, DE 19702. A celebration of William’s life will begin at 10:30. A webcast of the service will be available for those unable to attend:https://webcasts.lifetributes.com/1153155 Burial will immediately follow at Gracelawn Memorial Park. In lieu of flowers, donations can be made in William’s memory to the Wounded Warriors Project at Support.woundedwarriorproject.org For directions or to send an online condolence visit www.stranofeeley.com. To send flowers or a memorial gift to the family of William L. Milliken please visit our Sympathy Store.

William (Bill) L. Milliken, age 86, of New Castle, DE passed away peacefully on August 2, 2021. His wife, Carol, and his son, Will, were by his side supporting his transition to the next world. Bill was born on September 29, 1934, in Wilmington,... View Obituary & Service Information

The family of William "Bill" Milliken created this Life Tributes page to make it easy to share your memories.

Send flowers to the Milliken family.