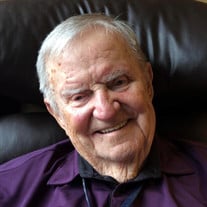 William Curtis Williamson,”Curt”, 93, of Ocean Isle Beach, went home to the Lord peacefully while resting on Tuesday, December 15, 2020, in Newark, Delaware where he has lived since 2012. Curt was born in Brunswick County, North Carolina on February 13, 1927. He was the son of John Bunn Williamson and Lovie Bennett Williamson. He and his late wife, Ethel, managed the Ocean Isle Beach Fishing Pier for 27 years before retiring. Curt was not a man of many words, but he loved to listen. He was always a big, strong man, and he loved just as big with a huge, open heart. He was thankful every day for the time he had with his family and took happiness in the smallest of things. He was so easy to love! His most favorite things included hot dogs, hugs, visits, puppies and just being with people. He is survived by his daughter, Barbara Williamson Harvell and her husband Stephen of New Castle, Delaware; three grandchildren: Shawn Wilson Harvell, Brian Curtis Harvell, and Alison Lee Harper; four great-grandchildren: Stephen Harper, Madison Harvell, Noah Harper, and Tyler Harvell; and three sisters: Lois Little, Doris Nance, and Lillie Suggs. A private graveside service will be held at Bennettown Cemetery, Ash, North Carolina on Tuesday, December 29, 2020, by the family. In lieu of flowers, donations may be made to Love of Christ Church, 2157 Bear-Corbitt Road, Bear Delaware 19701, in his memory. To send an online condolence, visit www.stranofeeley.com STRANO & FEELEY FAMILY FUNERAL HOME 302-731-5459

William Curtis Williamson,&#8221;Curt&#8221;, 93, of Ocean Isle Beach, went home to the Lord peacefully while resting on Tuesday, December 15, 2020, in Newark, Delaware where he has lived since 2012. Curt was born in Brunswick County, North... View Obituary & Service Information

The family of William Curtis Williamson created this Life Tributes page to make it easy to share your memories.

Send flowers to the Williamson family.