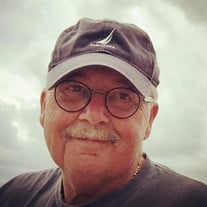 William E. Wissler, age 77, of Bear, Delaware passed away peacefully at home December 29, 2020 with his loving wife and son by his side following a long battle with Parkinson’s Disease. Bill was born in Coatesville, Pennsylvania on September 25, 1943. He graduated from Gunning Bedford High School in 1961 going on to work over 30 years in shoe retail and as a traveling shoe salesman throughout the East Coast. He decided to change careers and started a successful janitorial business for several years until ultimately retiring to enjoy his family. Bill and Carol enjoyed many cruises, vacations with family in Disney World and Outer Banks. He loved writing poetry, doing cross-stitch projects with his personal poems and collecting classic street rods as a member of the NSRA. In later years, he loved spending his time with his two youngest grandchildren, Hunter and Noah. Bill is survived by his loving wife of 50 years, Carol, their son Daniel and his wife Rachel of Bear, DE, daughters Andrea Williams of Lewes, DE and Danielle Rossi of Middletown, DE, son John Wissler of Sarasota, FL, son-in law Todd Williams of Lewes, DE, grandchildren Hunter, Noah, Lacy, Drew, Shawnee, J.C., Samantha, Brian, Hayley and Jarad, his sisters Beverly Curlett (George) and Terry Reed (Terry) and many nephews, nieces and extended family and friends. Bill was predeceased by his parents William Howard and Evelyn Jane Wissler. The family would like to thank VITAS Hospice of Delaware for their excellent care during his illness. Per the request of the family, there is no visitation and services and burial will be private. Arrangements are being handled by Strano & Feeley Funeral Home, Newark, DE. Online condolences may be made at www.stranofeeley.com.

William E. Wissler, age 77, of Bear, Delaware passed away peacefully at home December 29, 2020 with his loving wife and son by his side following a long battle with Parkinson&#8217;s Disease. Bill was born in Coatesville, Pennsylvania on September... View Obituary & Service Information

The family of William E. Wissler created this Life Tributes page to make it easy to share your memories.

Send flowers to the Wissler family.